Blockchain Adoption into Mainstream- How Close?

The Diffusion of Innovation Theory, first postulated by Everett Rogers in 1962, explains how an idea, product, or behavior takes root in society through different segments of a population. It starts slowly at first with the “innovators” and “early adopters,” who make up just 16% of the population; these are the intrepid individuals who see opportunities before they are there, who are willing to experiment, take huge risks, and change the status quo.

After them, the innovation begins to gain traction and spreads exponentially to the “early majority,” who are more wary than the ones who came before but still eager to jump onboard. They are followed by the “late majority”—a risk-averse and skeptical population—and finally, the “laggards,” the ones who are most resistant to change. At this point, the diffusion of innovation is complete—a new norm or product has achieved dominance in society. This model of adoption has occurred throughout history, from the rise of the iPhone to the abolishment of slavery. 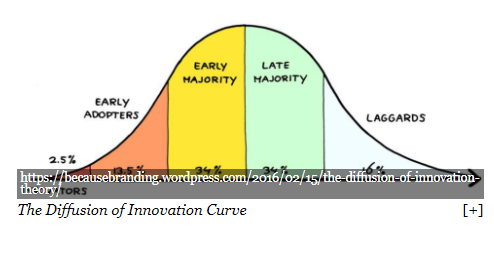 Where, then, should we situate blockchain on this curve? Many believe we are already in the “early majority” phase of exponential growth, and that we are on the cusp of full adoption. I wish to temper expectations and introduce more nuance into the equation. It is important that we examine the issue of blockchain adoption from two different angles: investments and technology.

On the investments front, blockchain has indeed reached the level of “early majority.” More and more capital, both institutional and household, is being poured into cryptocurrencies today. In 2017 alone, the total crypto market capitalization ballooned from 18 billion dollars to more than half a trillion dollars. Coinbase, the online exchange for buying and selling digital currency, recently reached more than 10 million users worldwide and became the most downloaded app on the U.S. Apple Store.

Online wallet and portfolio tracking apps like imToken from China and CoinManager from Korea have also seen exponential expansion in their user base. In Korea, one of the largest crypto markets in the world, more than one-third of salaried workers are investors. CBOE and CME, two of the world’s largest financial exchanges, took the unprecedented step of launching Bitcoin futures last month. Across the globe, more than 2000 Bitcoin ATMs have sprouted up. The signs are clear.

How Far Have We Really Come?

From a technological perspective, however, we are still quite far behind. Firstly, there exists a dearth of talent. Blockchain developers are few and far between; the growth of many crypto-projects has been limited by the difficulty of finding qualified technologists. Secondly, there remain many technical issues that need to be ironed out, the most notable of which is scaling. Blockchain networks are still not capable of handling the high transaction volumes that could rival that of large industries and financial institutions. Without the appropriate scaling solutions, transactions costs would be too high and the wait times too long for viable adoption. This can be especially concerning, given that 2018 is the year where a lot of blockchain platforms start running on the Ethereum blockchain.

The sudden influx of many blockchain applications will likely exert greater pressure on the network, due to the exponential increase of activities on the blockchain. If not handled properly, this might result in expensive transaction costs for application on the Ethereum blockchain, and unbearably long waiting time for a transaction to be processed. That said, there are several promising scaling projects currently in the pipeline, including Raiden Network, Plasma, Zilliqa, and Lightning Network. In light of these challenges, I would say that the technology aspect of blockchain is only in the “early adopter” stage, perhaps even in the “innovator” stage.

You can see the problem here. There is a gap between technology and investments. If we continue to grow the latter without supporting the development of the former, we might face a severe overvaluation of cryptocurrencies. Yes, the market has reached half a trillion dollars, but as Vitalik Buterin, founder of Ethereum, recently questioned, “Have we earned it?” More must be done to support the training of blockchain developers. Leading institutions such as National University of Singapore and Singapore Management University are some of the pioneers in this regards. And of course, greater resources should be directed towards advancing scaling solutions. Blockchain technology needs to catch up to blockchain investments. If the gap is too large for that to happen, perhaps we should dial down the fervor of our speculation.

Yes You can make free Bitcoins

LocalBitcoins.com Published on 27 Aug 2014 Buy and sell bitcoins with the LocalBitcoins ATM. richardtrenes8 months ago I will buy one and place them here in Southern Spain in the next few weeks REPLY HydroTekZ3 Read more…

How To Withdraw Cash From A Bitcoin ATM

Bitnational Published on 11 Jul 2017 How to withdraw cash from one of our Bitnational Bitcoin ATMs. www.bitnational.com Rohit Kumar1 month ago Who all came here for Nicole? REPLY Ray Casey3 months ago Cult REPLY Read more…